Unfortunately, the game is completely closed at the moment. Now they are not even allowed to train anymore. In addition, the first death as a result of the virus occurred in Gongo La Mboto at the end of April 2020. One woman suffered from the respiratory disease and of course many in the area are now worried.

Therefore our TanZebras proudly report that their mothers are sewing respirators on their own. But also our kids are not inactive. With the help of our team manager Don they have produced liquid soap which they want to sell.

Of course, this liquid soap is mainly intended for washing hands, but they swear that this soap has magical powers. They can wash not only hands, floors or cars, but also jerseys (swallow – how will I see our shirts again?), balls (learn rugby rules), shoes (swap ballerinas for football shoes in the future!) and goalkeeper gloves (does anyone have a doll collection?).

And so we thought that if the soap is so magical, it would also be suitable to wipe away sins and other stains. Ok, we can’t erase Gelsenkirchen from the map with it, but surely everybody here has a dead body in the cellar. And what could be more suitable than blue liquid soap from Tanzania filled in drinking water bottles*?

So we ordered 20 litres from our Tanzebras. We will pick it up on our next visit or have it brought to Duisburg at the next possible opportunity. But already now you have the opportunity to secure one liter of this miracle cure. In total they produced 150 liters and filled it into 5l canisters. For us the ordered 20 liters will be filled into 1l bottles. The 150 liters would have flushed a total of 42€ into the club cash box. A considerable amount for our three teams (two boys and one girl team). Now they still have 130 liters and a profit of 36,40€. I guess with our 20 litres for Duisburg we can top that!

There is no fixed price and it will not be auctioned in the conventional sense.

Would you like to have magic soap from Tanzania from the TanZebras? Get in touch with us! 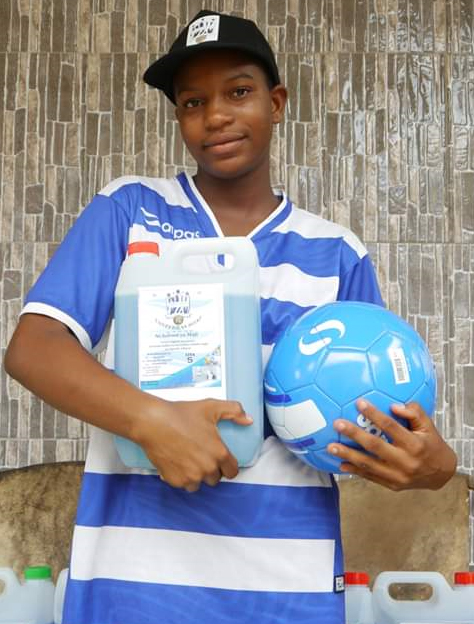