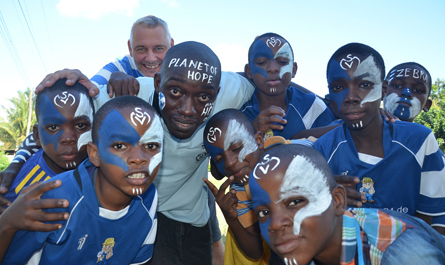 There is incredibly great news from Tanzania. Almost six years ago, we donated a set of jerseys from MSV Duisburg to a street soccer team on the beautiful African east coast. This was also done on three other continents to carry the zebra stripes around the world, but only the TanZebras kept in touch.
The street team quickly developed into a sworn community with meanwhile two men’s teams and one girls’ team, which have already caused a sensation regionally. So we founded an NGO (PLANET OF HOPE ORG) and a real club, which became firmly established in the hobby leagues of Tanzania and finally moved into the more athletically ambitious seniors’ area.
The constant positive development only allowed one conclusion and we decided to take the next step and register TanZebras FC as an official member of the TFF. The idea was actually to fight our way from the bottom to the top in terms of sports, but then we were completely perplexed when the association offered us to start in the 4th league already for the coming season! Whether it was the visit of the TanZebras in the German embassy a few months ago, the efforts to promote women’s football or the joint training with record champions Simba SC Tanzania that had an impact – we don’t know, but we now have a unique chance!

Overcoming the challenge together

With this opportunity incredible possibilities open up for us and TanZebras FC, but the responsibility also grows. The license, travel to away games, a set of jerseys with the logo we designed, the sporting challenge – all these are associated details that now need to be transformed into a coherent concept. In addition to contracts and health insurance, numerous other requirements await the team.
To write football history and above all to write their own club history, to appear in national and international rankings, to become a cult club and win derbies – all this is now possible with a little support from Duisburg, a good portion of creativity, decency and a lot of love for football! To show the children and young people on the spot what opportunities there are in their own country if you just take action, that is our wish and ambition. But for this we need your help!

Would you like to take the next step with us? Write a piece of Duisburg football history in Africa with us and courageously seize the opportunity?